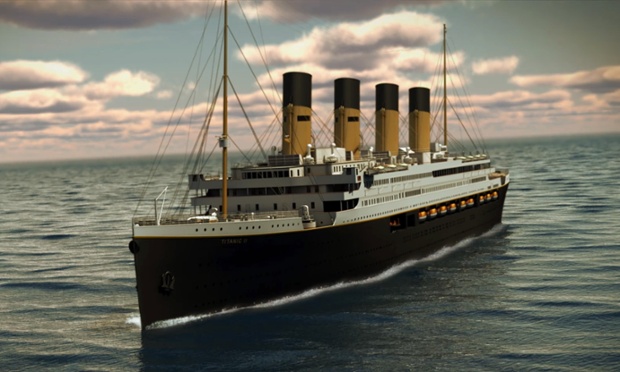 guardian: Unsinkable? A mining tycoon plans to make exact copy of doomed ocean liner for journey across the Atlantic. The above is a computer-rendered image of the exterior of Titanic II, due to launch in 2016.

My Commentary: Titanic is a historic ship whose fate was unfortunately determined by decisions based on arrogance. I feel that building a “new” Titanic is a mistake because its going to be built in China and its disrespectful to the memory of those who perished in the one and only voyage of the original. Cruise ships have a new standard of luxury that people expect these days. The “new” Titanic would be nothing more than a very expensive novelty. One hundred years ago today the RMS Titanic sunk to the bottom of the ocean in one of the worst maritime disasters in history. She was on her maiden voyage from Southampton, UK to New York, NY, USA. Fifteen hundred lives were lost that fateful night. It was said that Titanic which was the grandest ocean liner of its day was “unsinkable”. Over 700 survivors would be taken from the lifeboats by the RMS Carpathia a few hours later.

Important changes came about from this disaster such as 24 hour radio/telegraph operators, more lifeboats and ice patrols to check for icebergs.

Popular culture has extended the life and legacy of this story. Titanic has been regaled in film, art, exhibits, memorials and song. It is hard to believe its been 100 years but its important to remember the people who perished and the lives that changed because of this tragedy. 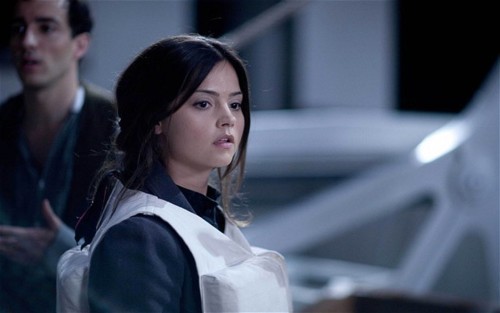 Tonight on ABC TV here in the states the mini-series “Titanic” makes its debut. “Downton Abbey” creator Julian Fellowes has written this series to mark the 100th anniversary of the Titanic’s maiden voyage and subsequent disaster in the Atlantic. The show will tell a wide variety of stories about the people both real and fictional who were on the ship for that fateful voyage.

Appearing in this series is Jenna-Louise Coleman who will make her debut as the new companion on “Doctor Who”. This will be our first look at what Ms. Coleman can do and perhaps what we can expect from her.

As most “Doctor Who” fans know there was a storyline about a space faring version of Titanic in the Christmas special “Voyage of the Damned” which David Tennant was brilliant in.

We will have to wait til this Christmas to see the new companion’s first voyage with Matt Smith who plays the 11th Doctor. I look forward to seeing her tonight in “Titanic” and as we know about “Downton Abbey” it will be a great show.

Rose and Jack. Kate and Leo. We saw Titanic in 3D today and it makes it just a little better. There were some dialogue in the movie that James Cameron would use in Avatar.