Queen Elizabeth II as cool as she is won’t live forever. This is a great article about what would happen from a cultural, economic and cultural perspective when she does pass away. Once again she is not dead and is still the monarch of the United Kingdom.

At this point a reunification wouldn’t be such a bad idea. Just think all the BBC we could watch.

It bothers me for some weird reason when everyone calls the Dutchess of Cambridge, Kate Middleton. Her title has been, for over a year now Catherine, Duchess of Cambridge and her new full name is now Catherine Elizabeth Mountbatten-Windsor No one called her late mother-in-law The Princess of Wales, Diana Spencer by her former name. I think its disrespectful and kind of lazy to just call her Kate Middleton because that is what we have always called her. Times have changed and she is going to give birth soon to a future King or Queen of England. She along with the royal family deserves more respect.

Your argument is forever invalid. Nothing is more awesome than this! 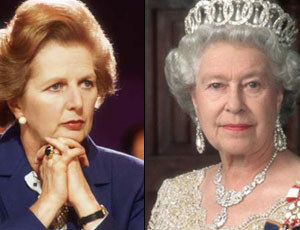 Our friends in the United Kingdom have had some great women in leadership. Queen Elizabeth II has been on the throne for 60 years. They have had a great woman in Margaret Thatcher who was Prime Minister. Amazing fetes and a great role model for young women all over the world.

I hope for a woman to lead our nation one day. Perhaps there will be one in my lifetime. Women can do anything and we need to be sure today’s girls grow up to have every option available to them.

God Save The Queen – Congratulations to Queen Elizabeth II for her 60 years on the throne of 16 sovereign states known as the Commonwealth realms, and head of the 54-member Commonwealth of Nations. God bless her and her family.