whitehouse: We see some great things here at the White House every day, and sharing that stuff with you is one of the best parts of our jobs. That’s why we’re launching a Tumblr. We’ll post things like the best quotes from President Obama, or video of young scientists visiting the White House for the science…

(If you don’t have Tumblr as a part of your social networking/media strategy, you are missing out. Even the White House is hanging on Tumblr now)

President Obama will be addressing the nation tonight as he delivers the first State Of The Union of his new term. This address is to give a report of the condition of the country and to lay out The Presidents legislative agenda. Of course it requires help from congress.

The constitution requires that it be delivered annually although it doesn’t have to be given in speech form. Woodrow Wilson was the first president to give a speech to both houses of congress. Its usually given in late January or early February.

In tonight’s address the president has everything from the economy, the environment, gun control and other issues. What he says will be scrutinized by his own party as well as rebutted by the opposition.

I will watch with great interest and what he says is important to each of us. No matter what there will be some who like what he has to say while others not so much. 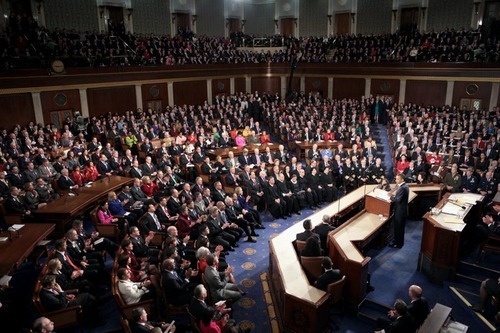 Image courtesy of Wikipedia and the US Government

There will be lots of Inauguration posts today. Thank you for the indulgence.

Vice President Joe Biden is a great leader and an even greater man. He has gone through adversity in his life but has remained strong over the years.

On Jan. 20, 2009, Barack Obama was sworn in as the first African-American president of the United States. And Monday, President Obama will be sworn in again — this time on a most auspicious day, the Martin Luther King Jr. holiday.

(via Obama’s ‘Hope And Virtue’ Distilled In A Song : Deceptive Cadence : NPR)

If you visit the President’s Facebook page his “like” total increases as you refresh your browser. To the victor goes the spoils.