Gwyneth Paltrow Movie Weekend – We have seen two of her older flicks this weekend. Our choices were “Emma” a adaptation from the Jane Austen book and a contemporary film “Sliding Doors” where she stars with John Hannah. She can carry off a great British accent, her husband is Coldplay front man Chris Martin who is from the UK. Her other Brit flick was “Shakespeare In Love”. The Academy Award actress is a great talent who we have seen recently in “Iron Man” and “The Avengers”

The Other Boleyn Girl – Full of sci-fi fandom goodness and more!

A sumptuous and sensual tale of intrigue, romance and betrayal set against the backdrop of a defining moment in European history: two beautiful sisters, Anne and Mary Boleyn, driven by their family’s blind ambition, compete for the love of the handsome and passionate King Henry VIII (from IMDB)

This movie features Natalie Portman (Star Wars), Scarlett Johansson (The Avengers) Eric Bana (Star Trek), Benedict Cumberbatch (Sherlock/Star Trek), David Morrissey (Doctor Who). We can say all these actors have enchanted us on the big and small screens as they zoomed across the universe or have solved a mystery or protected mother Earth. Its a movie worth seeing.

Watching the Incredible Hulk movie featuring Edward Norton, Liv Tyler and Tim Roth, William Hurt. The Hulk from the TV series Lou Ferrigno makes a cameo. Special thanks to our friend Will Rodgers for loaning this movie along with Thor to us so we could finish the individual Avengers movies.

Siri, assemble the Avengers. I guess there is an app for that.

Marvel Has It! In the superhero movie department no one does it better than Marvel. I am not a big comic book guy but with everything I have seen from X-Men to The Avengers to Spiderman no one does a superhero movie better. Everyone else pales in comparison. Really good stuff! Now how about a X-Men/Avengers combo flick…that would be THE BOMB!

This was an amazing weekend for geeks and those who are geeks at heart.

“The Avengers” debuted to big box office numbers here in the states. In what in my opinion is the best super hero movie ever made people went to the theatre’s in droves. The action and the story are really good! We saw it on a bigger than normal screen in 3-D. Great stuff!

On Sunday on PBS it was the series/season premiere of “Sherlock” which is a modern day adaptation of the classic “Sherlock Holmes” stories. We think that its one of the best shows on TV on the planet.

The Moon was closer to the Earth making it look bigger and everyone called it “Supermoon”. We didn’t see it because of some clouds and where our house is the hills got in the way a little. We didn’t get up to see it when the moon was overhead.

I love it when there are moments of geekness that everyone can share in. It reaffirms the fact that “The Geeks shall inherit the Earth”! 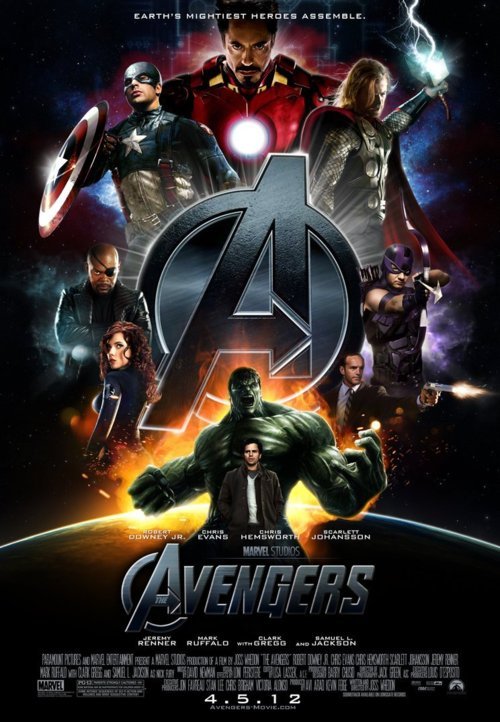 To those who haven’t seen “The Avengers” you are going to love it. If you wait for it on DVD you are cheating yourself out of the best viewing experience and that is at your nearby cinema with its great picture and sound. Yes it will be nice to sit in your living room to see it from the comfort of your living/media room. You will enjoy this movie from the start. It’s the new standard for super hero movies.

The Avengers is the best super hero movie ever made…ever. Joss Whedon brought together a super cast, gave them a solid story and made movie magic. Chattanooga’s own Samuel L. Jackson was stellar in his role as Nick Fury. The whole cast brought their A-game to this epic movie. The visuals were amazing and enhanced the movies action scenes. Mark Ruffalo was very good as Dr. Bruce Banner/Incredible Hulk.

We have seen the rest of the cast in their own movies with the exception of Black Widow played by Scarlett Johansson and Jeremy Renner who plays Hawkeye. Some of the best lines were delivered by Robert Downey, Jr./Iron Man. We haven’t seen “Thor” or “Incredible Hulk” yet so this was our first intro to those characters and Chris Hemsworth is quite good.

There were great moral lessons on power to be learned from this flick. I like a movie that makes you think a little and this one didn’t fail to do that.

Its worth another look and a must buy on Blu Ray.However you need to see this on the big screen, this movie is worth the expense for 3D. This is a good movie for younger kids with minimal profanity however the enemy monsters were a bit intense.

We really enjoyed it! You will too!

Geek night at the Majestic 12. THE AVENGERS. (Taken with instagram)