Change is a constant in life. It doesn’t matter if you are a United Methodist Pastor or a Time Lord. This weekend I became very aware of that fact. In everything there is some sort of transition. People, places, things all have a season of changing. Time can be wibbly wobbly, it can be unpredictable, you never know what is going to happen next. However you can count on people having to move on from one station in life to another. My pastor is leaving after five years. She made a promise that she would be willing move at the discretion of God and the Bishop of our part of the United Methodist Church. Pastor Amy has served our church and community very well, it hasn’t been perfect. Much like the voyages of a Time Lord a pastor encounters situations that can challenge and test them in a variety of ways. People and companionship are vital parts of the mission of a Pastor. She will be leaving us shortly to be lead a church in Virginia.

Matt Smith will be facing change too as he announced he is leaving the dream job of many actors and that is to play “The Doctor” on Doctor Who. He has been there about 4 years and his adventures in time and space are a creation of Steven Moffat. The great ones know when its time to step down and he feels like its time. So soon there will be a regeneration when a new doctor makes a debut and will lead team TARDIS. 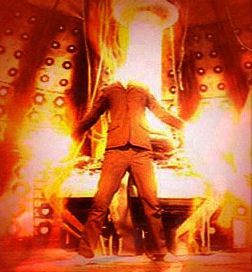 The Church and the TARDIS are a lot a like. They both can lead you into the future with faith and you learn about lords of time and space. God is in control of my pastor’s situation as well as my church.

My pastor will make way for her replacement, a regeneration of sorts. It’s by design this happens in our church community. For many people a fresh start can mean a lot. I am happy for Amy as she makes her way with family in tow for a new adventure. Matt Smith will head to Hollywood to see if he can make his mark in America.

It’s going to be an exciting few months for two things I hold dear. White Oak United Methodist Church and “Doctor Who”.